California Employment Law Update: How to Get Your Office HR Compliant for 2020

Human resource compliance can be challenging. The requirements continue to get more complex every year as they are updated to address current issues regarding labor and employment.

Several new employment laws went into effect on January 1, 2020 and they will have a lasting impact on California employers, including those who operate and manage dental practices. These include the following regulations:

In addition, temporary and seasonal employees must be trained within 30 days after being hired or within 100 hours worked, whichever comes first. This training must be provided again to all employees every 2 years in the same fashion.

Governor Gavin Newsom has extended the deadline for California's new sexual harassment prevention training mandate for an extra year, meaning that you now have until January 1, 2021, instead of January 1, 2020, to meet this requirement.

In 2018, the California Supreme Court simplified the determination between an independent contractor and an employee by introducing what is commonly referred to as the "ABC Test".

Under the ABC Test, in order to establish that a worker is an independent contractor, the employer must establish all of the following factors:

This new test went into effect as of January 1, 2020. However, in September 2019, Governor Gavin Newsom signed into law Assembly Bill 5, which effectively requires all professions to use the ABC test for determining the proper classification of workers, with the exception of certain professionals, such as lawyers, engineers, insurance agents, real estate agents, psychologists, doctors, and dentists.

If your dental office uses independent contractors, this is very important information to keep in mind. That is because the signing of Assembly Bill 5 means that rather than the ABC Test, you must continue to rely on the "Borello" test that was previously used to determine if a worker should be classified as an independent contractor or employee. 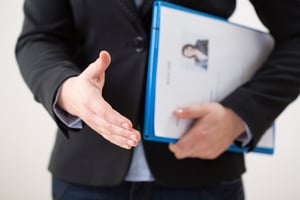 Under existing law, employers may not seek a job applicant's salary history nor use that information as a factor in determining whether to offer employment or to determine what salary to offer the applicant. Though this law went into effect back in 2018, it is still important to keep in mind, as hiring managers may still be accustomed to asking job applicants for their salary histories.

Under California’s Fair Chance Act, often referred to as the “Ban the Box” law, employers with 5 or more employees are prohibited from asking a job applicant if they have ever been convicted of a crime, unless a conditional offer of employment has been made.

"Ban the box" essentially means that employers cannot ask an applicant if they have ever been convicted of a crime on an application (i.e. a checkbox) or in an interview, unless required by federal or state law. Though this law went into effect in January of 2018, it is still very important as any violation can expose you to litigation.

It is extremely important for employers and dental offices to follow the law or risk getting sued, penalized, and having to pay high fines as a result of their non-compliance. We recommend that all dental practices comply with California's sexual harassment training mandate, review their employees' independent contractor statuses, and make sure hiring managers are aware of both the salary history ban and the “ban the box” law when interviewing potential employees.

We recommend consulting with a medical or dental attorney to discuss any issues with compliance.

This article was originally written for the San Mateo County Dental Society and is reprinted with their permission.